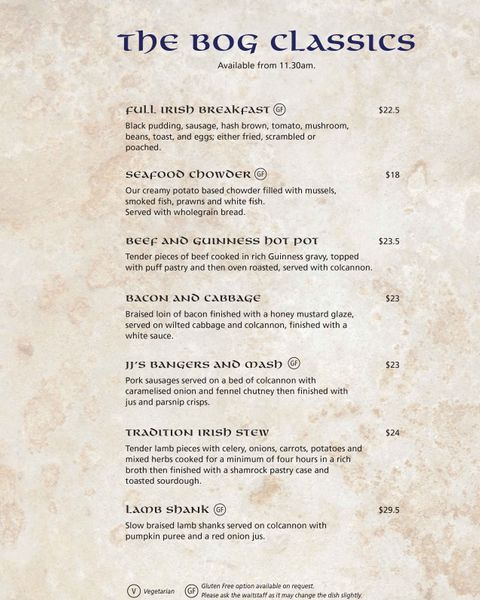 The Bog began its legendary history as the home of the Irish in Christchurch in February 2000 at 82 Cashel Street on the site of the Fail Café; New Zealand’s oldest and much loved seafood restaurant. The Bog quickly became the place known for its live traditional Irish music, hearty food and the best Guinness and Kilkenny in town!

In February 2011 The Bog in Cashel Street shut its doors after a devastating 6.3 magnitude earthquake that hit the city. In March 2014 The Bog proudly reopened its doors again in Christchurch in its current location on Victoria Street where it quickly regained its title as the best Irish pub in Christchurch.

Get down to The Bog, the finest Irish Bar and Restaurant in Christchurch, famed for the Guinness, tasty meals and of course the good times!

Also : Be sure to join the Oxford Club which gets you a 50c discount on all beverages, and earns 5% credit back from every full price item purchased. The credit that can be redeemed on food and beverages at any of the following establishments: The Bog, Fat Eddie’s, Original Sin, Kong, Bealey's Ale House.